Negative thoughts about my body and appearance have been with me from an early age. I was definitely under 10 and maybe much younger when I had my first feelings of ‘not looking good enough’ or of wanting different colour hair, a different shaped body or someone else’s face. How many times had I stopped to stare at women with beautiful hair or extremely thin legs, wishing desperately that I looked like them or had what they had?

While I’d known this had been an issue for many years, I decided I’d had enough just before my 40th birthday. At the beginning of Lent 2011, I resolved that I would not give up chocolate, crisps or bread or something else that I thought would help to somehow improve me or make me thinner. Instead, I decided to give up negative thoughts about my body and appearance – and achievements – for 40 days and blog about my journey. You can read the full blog at Just As I Am – An Experiment in Self Acceptance but to start this page off, I’ll include a post that particularly focuses on body image from April 8, 2011. 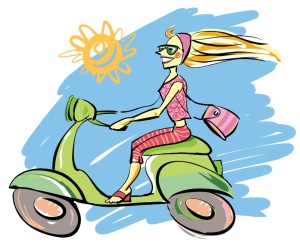 So this picture looks so unlike me it’s funny. The only thing that’s close to reality is the colour of the scooter (it’s a perfect match, in fact). But what isn’t that funny is that for a good chunk of my life I really wanted to look something like this. I particularly coveted two of her attributes: her super slim arms and her long, blonde hair – the kind of hair that would bounce along behind you. I got over wanting to be blonde a good while ago but I’ve never stopped wanting the long, thick, glossy, TV-ad kind of hair. And as for the arms, arm envy has been a big part of my life. I’ve often been jealous of my Latina friends’ tiny, toned arms or wished I had Michelle Obama’s long, elegant arms. (The First Lady’s toned arms originally caused quite a stir on the other side of the Atlantic, apparently.)

So, I realised last weekend that my Lenten self-acceptance efforts hadn’t yet reached my upper arms and it was about time I included them. This realisation came when I was wandering around London’s Spitalfields Market with a friend, browsing the clothes stalls. I spotted a purple dress that I thought would have suited for work. But I didn’t try it on – it had short sleeves. I could wear something under it, I said to my friend, a long-sleeved stretch top perhaps, but she frowned at the suggestion – why would I want to do that? Well, because I’ve always disliked my upper arms and have avoided exposing them wherever possible. Now, I know this is partly irrational and has a lot to do with perfectionism. These thoughts belong to that familiar pattern of always finding something to obsess about to distract me from other, more painful stuff. These are the types of thoughts that have kept me trapped for many years – thinking I won’t wear that dress until I’m a particular size or shape, or I’ll wait until I look like Cindy Crawford, Elle Macpherson, Kate Moss or whoever, before I start living life to the full. (As we know, these thoughts seem to be pretty common amongst women – 30 percent of women today would trade at least a year of their life to achieve their ideal body weight and shape, according to this research.)

I also think, however, my arm hang-up is partly rational – my arms are ever so slightly out of proportion with the rest of my body. A dress, blouse or jacket will fit me everywhere else but sometimes it’ll feel tight or get stuck on my arms. Just like some women struggle to do the zip up over their calves on knee-high boots, I sometimes struggle to get things over my arms. So what’s the answer? Well, I think it’s twofold. Firstly, I can do something about the way I feel about my arms. Michelle Obama may have good genes but those arms also look like they’ve lifted a few light weights or swam a few lengths, and I can do that too. Whenever I do some arm exercises, I notice slight changes and feel better about myself so I think part of the answer is physical – it’s about taking small steps to change the things I can. The other side of the battle is mental – learning to accept them just as they are, as a conscious act, on a daily basis. So that’s my challenge for the rest of this Lenten period and the rest of my life, of course. Because self-acceptance isn’t just for Lent, it’s for life!

On the subject of body hang-ups, I might as well talk about the other one: my hair. Negative thoughts about the state of my hair have been some of the hardest ones to fight, or surrender, this Lent. There is a history to this, and it’s kind of painful, emotionally, but there’s bound to be some irrational thoughts and feelings in there also. When I was younger, I was never happy with my hair, just as I was never happy with my appearance in general. I think this is pretty common – if our hair is curly we want it to be straight, if it’s blonde we want it to be dark. But those thoughts and feelings are particularly stark for young girls who have low self-esteem or are self conscious about their appearance. I’d say that was me when I was younger, although I may have hid it well by being outwardly confident and capable. I remember being very angry at the fact that every time we played Charlie’s Angels I had to play the one with dark hair and my blonde friend got to play the blonde. I wanted to play the blonde!

But of course we never truly appreciate anything until it’s gone and so my dissatisfaction with the colour of my hair paled into significance when my hair started to thin and its texture changed when I was around 15. Now I really had something to worry and obsess about. I could blame what happened on a bad home perm but I think the real reason was that I started to undereat around that age so I think it was hormonal. My body wanted to grow up but it didn’t have enough food or fat to do so. I’m no doctor, this is just how I see it. Maybe it was always going to happen, who knows. Soon, though, my undereating turned to overeating, but that didn’t make the hair grow back. It just meant I was now bigger than I was, terribly self-conscious about my body and with thinner, frizzy hair.

I’ll never forget the excruciating moment when, as a teenager, I was heading in to a changing room at a clothes store in Liverpool and two girls went in to the cubicle next to me. They’d seen me and I heard them say, “Isn’t that Katherine? What’s happened to her? She used to be so slim. And her hair, it’s gone all frizzy.” That was my recollection, anyway. And I remember the other school friend who said, “You’ve got a really pretty face. Shame about the hair.” Of course, we all know kids are cruel and maybe some children on the receiving end of such comments can brush them off. I certainly didn’t. I’m 40 and I still remember them! I can also remember the restaurant owner on the Greek Island who said, squeezing my upper arms, “pretty face, shame about the body”. That Greek trip came after a summer I’d spent working at Haagen Dazs ice cream parlour in Oxford. I ate ice cream for breakfast, lunch and dinner and ended up feeling pretty unhappy about my weight and my looks.

So, overweight and with frizzy hair – that definitely wasn’t how God had intended me to look. I felt like I’d been given something pretty reasonable to work with but that I’d ruined it. So my mentality was that because I didn’t look perfect, or anything like it, why bother? Why look after my hair, why stop binge-drinking or binge-eating? Why wear nice clothes or get a good hair cut? It took me many years to recover some vanity or healthy self-care and I thank Mexico and some of my Mexican girlfriends for reintroducing vanity into my life. But then I went to the opposite extreme – diet pills, over-exercising, body obsession etc. It was only in my early 30s that I realised that my eating behaviours and lots of my other behaviours weren’t healthy and I set out to get help, to find out why I was behaving as I was and to learn some real self-care – including eating healthily, exercising moderately and getting regular hair cuts. In the case of my hair, it’s also meant seeking advice to make sure I’m doing what I can to keep my hormones balanced and my hair healthy. Omega 3 has worked wonders.

My growing self-esteem, however, doesn’t mean that every time I take off my scooter helmet I don’t wish I had long luscious locks that would effortlessly rearrange themselves as I shake my head (like on TV!). But I’m realising it’s not going to happen so I’d be better off cherishing what I have. So, today, I’m doing my best to say thank you God for my hair and please take away the self-obsession, the body obsession, and replace it with greater self-acceptance, peace, contentment and a desire to live and enjoy life, just as I am.

Who would I rather be? I’ll stick with me.