I wrote in a previous blog post that I was going to explain more about my Operation Happiness plan but I got sidetracked by the Samantha Brick saga (see my previous post if you’ve never heard of her!), which, after a quick glance at some news sites, is still going strong – it seems she might be paid large sums of money to go on Celebrity Big Brother.

While the story has blown over for me, I still think it sparked interesting debate and it certainly got me thinking about my own relationship with my looks, where, it seems, there’s still room for improvement. Predictably, as I watched back the episode of Boulton and Co on Sky News on which I was invited to talk about beauty and Samantha Brick (Thursday April 5 if you have Sky – I can’t find a link that’s free), I cringed at the sight of myself on TV. I thought I looked fat and unattractive, as well as overly made-up and wished I’d chosen different clothes. And does my mouth really move in that odd way when I talk?

So there I am, on TV, talking about the importance of celebrating our uniqueness and loving the way we look. And then, a day later, I’m sitting on the sofa, watching it back, and berating myself for looking like I do. The irony hasn’t escaped me – I’m aware I’m a walking contradiction! But the good thing is that I am aware of it. Unfortunately, my negative thinking and that hyper-critical voice in the back of my head are pretty powerful – after all, they’ve been given free rein for many years – and it’s going to take a good deal of effort to challenge those thoughts and replace them with healthier ones. The interesting thing is that nobody else gets the hard time I often give to myself. I tell my friends they’re beautiful, courageous, stylish, talented, witty etc but I can’t remember when I last used those words to describe myself. I could definitely do with an injection of Samantha Brick-style confidence, although I don’t think Celebrity Big Brother is for me.

So back to Operation Happiness, which could also be called Operation Freedom, since for me, freedom from negative thinking and from emotional turmoil and freedom to live the life I want to live and not the one I think I ought to are the route to happiness.

I decided at my 41st birthday that there was something missing in my life – something important for my happiness – and I’m doing my best to resolve that. As I sent out invitations to my karaoke party, I realised I was inviting work friends, church friends and friends I’ve met over the years on my addiction recovery journey. But there were no ‘hobby’ friends. I’ve toyed with hobbies in recent months as this blog will attest – singing being one – but nothing had stuck. So I asked myself that question that life coaches and self-help books universally recommend: what made me happiest as a child? The answer was team sport – sociable, competitive, team sport in the great outdoors.

I always loved team sport at school and university but I dropped it once I began travelling and living abroad. I worked hard, partied hard and did my exercise in the gym or ran on my own. I joined in with great enthusiasm whenever there was the chance to play football or rounders at a picnic or a work gathering but there was nothing regular. It’s sad to think I spent so many years not doing something that makes me very happy.

But now I’ve identified what’s missing, I’m doing something about it, even if I’m not as young and fit as I used to be and various parts of my body ache due to injury and misuse. I’ve been to Ultimate Frisbee in my local park – taking advantage of the fact that I grew up with a brother and can throw reasonably well. I’ve signed up to play doubles tennis socially also in the park. And I’m on the lookout for a mixed softball team that’ll bear with me as I try to convert my schoolgirl rounders skills to softball.

Now, as you’ll see, I’ve gone a little overboard. I was supposed to be finding a team sport and I’ve pretty much signed up for three. As my Mum always says, I never do anything by halves. But I see this as an exploratory stage and hopefully one of them will stick, or rather I’ll stick to at least one of them. I’m discovering it’s a lot easier to exercise after work if there’s a fun team sport going on in my local park.

Another element of Operation Happiness involves weekend activities in the great British countryside, preferably with bicycles, tents and, if possible, live music. I was never really into the British music festival scene. After all, I spent my 20s and early 30s – those key music festival-going years – living abroad. But I went to two last spring and summer and I hope to go to more this year. I’m talking about the smaller festivals. Although Glastonbury sounds amazing, I’m not sure I’m up for that degree of revelry and mud.

I began my festival-going year last weekend with a return visit to Wiltshire and to Onefest, which I went to last April when it was in its first year and called Honeyfest. Last year’s trip gave rise to the blog ‘Do more of what you love‘ and reminded me how much I enjoy camping, cycling and listening to live music in a field. Re-reading that blog post is really interesting. I can see how I still struggle with some of the same issues but I can also see a slight shift in my thinking. Last year, I came close to cancelling the trip because I was overwhelmed with work, exhausted and worried about the cold. The same thought crossed my mind on Friday evening for similar reasons but it was fleeting and I soon banished it from my mind. I was going, irrespective of my tiredness or the weather. I’d learned the previous year that getting me to my destination would require effort but that effort was well worth making. 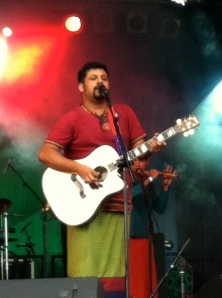 This year was a different experience but just as rewarding. There’s something so refreshing about standing in a muddy field listening to live music, barn dancing with friends and strangers to the sound of a fiddle in a marquee and eating pie, mushy peas and gravy out of a cardboard box. And as if all that wasn’t therapeutic enough, Raghu Dixit performed his own special brand of Indian-folk fusion while sharing his ‘don’t worry, be happy’ philosophy on life with the crowd. You can hear some of his music here.

Camping, too, was a different experience to last April when we all froze. As we pitched our tents on Saturday afternoon, a friend realised her sister lived twenty minutes away in a three-bedroom house so we unpitched the tents at the end of the night and slept indoors! I do love camping, but not so much when the temperature is minus 1. And there are plenty of summer months ahead to sleep under canvas.

I returned to London late on Sunday – after a long walk, a pub lunch and a slow train – and very tired. Despite the comfort of the double bed and duvet, my overactive brain had kept me a wake a lot of the night and I hadn’t had much sleep the week before. But it was worth the tiredness to get out into the countryside with friends and music. And I’d say it generally always is.

I am a writer, coach, midlife mentor, motivational speaker and the author of How to Fall in Love - A 10-Step Journey to the Heart. I specialise in coaching women and men to have healthy relationships with themselves so that they can form healthy and loving romantic relationships and lead authentic, fulfilling lives. I coach 1:1, lead workshops and host retreats.
View all posts by Katherine Baldwin →
This entry was posted in Body Image, Fun, Leisure, Self-Acceptance, Uncategorized, Women and tagged Body Image, Onefest, Raghu Dixit, Samantha Brick, Women. Bookmark the permalink.