Posted on November 21, 2012 by Katherine Baldwin 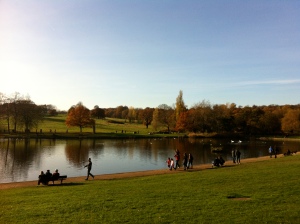 Beautiful colours on the heath

On Monday morning of last week, I was in a North Wales aquarium looking at the fish, sharks, seals and sea lions. On Tuesday, I was at the theatre in London’s West End to see Richard III – on a free ticket and sitting with a friend in a private box. On Saturday, I went out dancing with a bunch of pals in my purple, sequined dress until the early hours of the morning. And on Sunday, I cycled under crisp, blue skies through a mush of beautifully coloured leaves across Hampstead Heath.

Then last night, after getting soaked on my scooter on the way home, I took a long bath. I mean a really long bath. I kept thinking that it really was time to get out but I kept sinking back into the warm bubbles with a smile on my face. It was one of those rare, ‘I’m exactly where I need to be and have everything I need to be happy’ moments.

It got me thinking that, all in all, it’s not a bad life.

It’s all about perspective and the way you look at things.

I learned a bit about perspective on a 10-week painting course for beginners that I’ve just finished. We worked in oil and acrylics, explored the colour wheel, tones and shades and we painted still life.

I knew that painting would be good for me. It’s a different kind of creativity that – I imagined – would be much less cerebral than writing. And I thought it’d help calm my over-active mind and give me something to focus on other than my thoughts.

It definitely did that and it also taught me some valuable lessons in imperfection, letting go of control, going with the flow and trusting the process.

I remember the first few lessons. They drove me mad. I didn’t have a clue what I was doing. I wanted someone to give me more definite instructions, to tell me what I was doing with my paints was ‘right’ or ‘wrong’, to stand behind me and say, ‘now mix in this colour’ or ‘now put some shadow over there’.

But it wasn’t that kind of course. We were given direction, yes, but then we were let loose with the paints and canvas. I remember when someone asked me after two classes how I was finding it. ‘Challenging,’ I replied. ‘I haven’t got a clue what I’m doing.’ It seems I was taking the same cerebral approach to painting as I do to so many other things.

Pretty soon, though, I chilled out. I was half-way through a class when I realised painting wasn’t about right or wrong or getting the perfect shade or tone. It was about experimenting, playing, interpreting and letting things evolve. Once I’d realised that, the course became a lot more fun. It was great to see how everyone, when asked to mix grey, ended up with different shades. Or when painting something red or blue, ended up with very different tones. And I loved creating a big mess of colours on my palette. 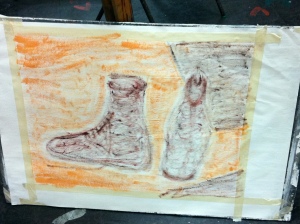 Then, in my final class, I had my biggest breakthrough. I’d been painting a pair of maroon-coloured Dr. Marten boots (in oils). I’d left the previous lesson feeling a little dejected and somewhat amused as I’d ended up with one boot and one vase. Yes, a vase. We’d painted vase-shaped items a few weeks earlier and we’d been advised to use a similar technique. But maybe I’d taken the instructions too literally. I had a boot and a vase.

While my new, more laid-back approach to my painting course helped me to see the funny side, I was still a little disappointed half-an-hour before the end of the final class because I still had a boot and a vase. 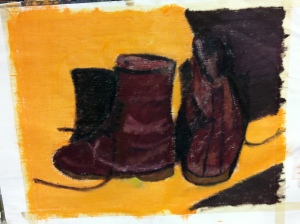 But then, with a few tips from the teacher, some suggestions from a fellow student and the application of a bit of light and shade, suddenly my vase turned into something that looked remarkably like a boot.

I was absolutely amazed. And delighted. I’d been about to throw in the towel and name my painting ‘The Boot and the Vase’ but I actually had a pair of DMs.

So my conclusion, after my 10-week painting course, is that breakthroughs often happen when we’re on the verge of giving up and that it’s always worth trusting the process and giving things time to evolve.

And it’s also always worth looking at things from a different perspective.

The teacher suggested we start our painting of boots (or shoes in the case of some of the students) by doing a very small, rough painting – marking out the general shapes that we saw – and then turning that small painting upside down. We would then copy from that upside down painting onto the larger piece of paper and, once we’d done that, we’d turn the big painting the right way up. 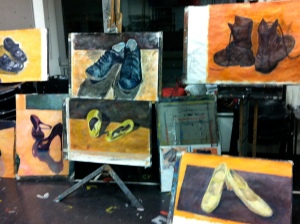 Boots and shoes by my talented fellow students

By doing this, we would look at the boots not as boots but as shapes, surrounded by other shapes and made up of light and dark. I confess we were all pretty sceptical as we turned our boards around but it actually worked.

It got me thinking about yoga again. About the poses in which you hang upside down and look through your legs or stand on your head. It’s all about seeing the world through a different perspective. According to common yoga wisdom, seeing the world upside down throws new light on old habits, behaviours and ways of being, reduces anxiety and increases self-confidence.

I haven’t managed a headstand yet and I’m still a yoga beginner, but I definitely like the idea of seeing things from a different perspective.

And I felt like I’d found some of that perspective last week. I had been feeling very overwhelmed about my workload and everything I need to do in the next few weeks but I suddenly decided to stop seeing everything as a terrible chore and to start seeing each day and each ‘task’ as a gift.

This new perspective is definitely helping.

I am a writer, coach, midlife mentor, motivational speaker and the author of How to Fall in Love - A 10-Step Journey to the Heart. I specialise in coaching women and men to have healthy relationships with themselves so that they can form healthy and loving romantic relationships and lead authentic, fulfilling lives. I coach 1:1, lead workshops and host retreats.
View all posts by Katherine Baldwin →
This entry was posted in Creativity, Women, yoga and tagged Art, Creativity, Painting, Perspective. Bookmark the permalink.