I’d written nearly 3,000 words on the topic of ‘Becoming Whole’ for a talk I was giving to the Mothers’ Union in a church hall in Brockenhurst, a beautiful village in the New Forest in Hampshire.

I’d opened with a scene from my political journalism days, a reporting trip I was on with Tony Blair. I’d described how we’d arrived in a hotel in Shanghai, checked in and been shown to our rooms. Then once in my plush suite, I’d made a beeline for the minibar, shoving huge chunks of chocolate into my mouth followed by handfuls of salty peanuts, before sitting down to write my story, panicked, frantic, scared of making a mistake. Later, I’d gone down to dinner with my press colleagues and tucked into a large banquet, before running back to my room and diving onto the chocolates the maid had left on the pillow. Nothing left to eat, I’d collapsed in tears.

On the outside, I’d written, I was a journalist for Reuters with a desk in parliament and a seat on the prime minister’s plane. On the inside, I was a mess – full of fear, insecurity, anxiety, imposter syndrome and using binge eating as a crutch to cope with the feelings and get by.

I’d described other painful rock bottom moments – on my knees, by the side of my bed, in floods of tears, asking, “What’s the point?” and then “God, if you exist, can you show me what the point is, please?” Times of loneliness, depression and grief, triggered by losing my Dad or the end of a relationship. My brief flirtation with anti-depressants.

I’d also written about the gradual process of becoming more whole, of my years in recovery from addictive behaviours, of quitting a job in which my soul had gone to sleep and slowly finding a way to do work that was aligned with my authentic self, at least some of the time. Then, towards the end, I’d encouraged my audience to be real, to be authentic, to share their struggles, to open up about their difficulties, to identify the desires of their heart and go after them. By being real, I’d written, we give others the permission to do the same. We all feel less alone, saving heartache, stress, loneliness and self-harm.

Only I’d written the wrong talk. The audience of respectable Christian pensioners* (see note below) sat before me wasn’t going to relate to this. Eating disorders, self-harm, binge drinking, the pursuit of a fantasy Mr Right, dating guys who didn’t treat me right, running away from those who did, compulsive working, an existential crisis, questioning the point of my life. And they certainly weren’t going to relate to the part about me hitting 40 without kids and now being 45 and coming to terms with the fact motherhood probably won’t happen. It’s the Mothers‘ Union, after all.

No, these themes definitely weren’t for the ears of the lovely ladies of Brockenhurst and its surrounding villages and towns. These were women of immense faith and with a strong sense of purpose, I said to myself, sure of their identity and committed to a cause. They weren’t flaky or ambivalent. They didn’t have a backstory of struggle, self-harm and feeling lost. Plus, they were of a different generation. And they’d all had kids. How could they relate to my world?

I looked down at my notes again. I’d better cut out most of my talk, skip over the unpleasant bits and stick to the successful journalist, writer, blogger, teacher part, I thought. These women, I heard as the Chair read out the notices, baked huge numbers of cakes, raised lots of money, put on events for local families, supported the community and worked hard to improve the lives of others, particularly those most in need. The story I’d planned to tell felt selfish, self-indulgent in comparison.

I began with a joke about my red jeans, white top, red cardy and red scarf – my clothes seemed so much brighter than everyone else’s. I stood out like a sore thumb. England was playing so I was in my team’s colours, I laughed, and I was born in Liverpool, so I’m used to wearing red and white.

I then said I’d written something down but was unsure about reading it, but I’d decided to read it anyway, believing it was what I was supposed to stay.

So we arrive in Shanghai … minibar … chocolate … low self-esteem … self-harm … binge eating … binge drinking … throwing up … stress … fear of commitment … singleness … what’s the point? … addiction … recovery … now in a relationship … living by the sea … no kids … being real …

Silence. All eyes on me.

They’re either listening intently or they can’t believe I’m saying all this and can’t connect with it at all. I’m not sure what to think but I’m in my flow now, speaking loud and with confidence, as my Dad always did, looking around the room, into their eyes.

I start to wrap up, encouraging my listeners to be real, to be open about their struggles, to feel the feelings, let them out. I’m sure you already are, I say, slightly apologising for what I’d dared to say. And even if what I’ve said isn’t relevant to you, I add, apologetically again, perhaps you have a daughter or a son or a friend who’s struggling and needs to open up to you. By showing some of your own vulnerability, you can help them.

I finish and it’s time for Q and A – that moment of silence when you’re convinced nobody’s going to speak up. But they do. 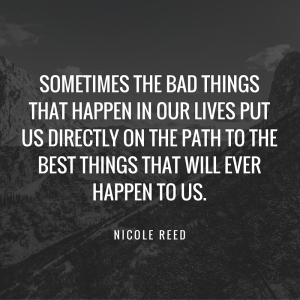 They’re stunned, absolutely stunned, they say, that I could be so brave as to turn up to a room of total strangers and bare my soul. Thank you for being so honest, so real, they say. Then some of them share their struggles, out loud, with the room. Struggles from the past or from the present day.

After the talk, ladies come to speak to me and share more of their stories, more of their realness, about their own eating disorder, about an abusive relationship, or about the struggles of their son or daughter. They tell me they’ve just been speaking with each other too, prompted by my talk – about loss, divorce, sadness and how they’ve questioned God. Not all of the ladies in the Mothers’ Union have children, I’m told. And there are men in the Mothers’ Union too. Who knew?

I’m humbled, humbled that so many of these lovely pensioners* (see note below) were touched by my talk, so touched they felt able to share something of themselves. I’m also surprised, surprised at the judgement I made as soon as I walked in and sat down, forming my opinion of them based on what I saw on the outside rather than looking inside, almost allowing my mistaken assumption that I was separate and different from them to stop me being real, rather than trusting what I know is true – that as humans, we all struggle, we all experience heartache and pain, some people just hide it better than others.

I’m delighted I said what I’d gone there to say rather than cut out all the tough bits and stick to the superficial. And I’m delighted it went down so well and it inspired and encouraged others to be real.

I now know I’m on the right path. I just need to move forward. I need to walk the walk. That involves pursuing my purpose, boldly, through writing and doing more of what I did last night, on a bigger stage. It involves being brave, being heard, being seen, breaking through, breaking free, being real.

Be Real, Be Heard, Be Whole

Be Real, Break Through

Be Real, Be Heard, Break Through (or Break Free) …

Answers on a postcard please …

I do this. I do this to myself. I fixate on the minutiae, the tiny things I can obsess about, the things I want to be perfect. It’s a distraction, a distraction from the fear I feel about being seen, being heard, living my purpose. I fear I’ll be judged and ridiculed. I fear I’ll fall flat on my face and you’ll laugh. I fear I’ll be wasting my time. But I had similar fears last night in Brockenhurst and they didn’t come true, so I’m taking courage from that. It’s time for my own breakthrough.

So thank you to the Mothers’ Union and to all those who came to hear me for confirming I have a gift for being real, for baring my soul and for inspiring others to do the same.

It’s a gift that deserves to used, to be seen.

*Since posting, I’m reminded the Mothers’ Union has members of a range of ages and that the term ‘pensioners’ can carry negative connotations. I’m sorry if my use of the term reinforced any unhelpful stereotypes. The ladies sat before me that night, as I learned from hearing their notices, are sprightly, active, energetic and hard-working and the MU has many younger members too. This has got me thinking about generalisations, perceptions and the ideas we associate with words.

I am a writer, dating and relationships coach, mid-life mentor and motivational speaker. I'm the author of How to Fall in Love - A 10-Step Journey to the Heart and I write for the national media on topics including love and dating, how to change unhelpful habits and have healthy relationships, and other aspects of personal growth. I coach people to create healthy, loving and authentic relationships with themselves and others, and lives they truly love. I lead workshops and run retreats. You can find out more about me at www.katherinebaldwin.com and www.howtofallinlove.co.uk or read my blog at www.fromfortywithlove.com
View all posts by Katherine Baldwin →
This entry was posted in Addiction, Childless, Eating disorders, Empowerment, Faith, Women and tagged authenticity, Breakthrough, Perfectionism, Real, Vulnerability. Bookmark the permalink.

9 Responses to Being real

filling the silence in the motherhood discussion

United by and beyond childlessness