Posted on December 20, 2012 by Katherine Baldwin

I’m writing this from a café in the afternoon sunshine – one of the advantages of taking a trip to Mexico in December. It’s winter here too, supposedly, and many chilangos (as Mexico City dwellers are affectionately known) like to bring out their heavy coats, boots and scarves at this time of the year. But you could get away without them, especially in the daytime.

So it took me a few days to settle in to this metropolis, which is only to be expected. It’s a chaotic city of 20 million people with horrendous traffic and a public transport system that takes some getting used to.

But I’m pleased to say I’m now feeling quite at home. I’ve mastered the metro and peseros again (peseros being the small buses so called because it costs a peso to ride them – or it used to when I first arrived here in 1995, it now costs three or four), I’ve remembered how to get from one neighbourhood to another and I’ve spent some quality time with some of my dear friends from the viejos tiempos (the old days).

Ambulances still sit in stationary traffic with their sirens blaring but with no way forward, although I did notice a few cars trying their best to make way. Windscreen cleaners still clean your car windscreen at the traffic lights even if you say ‘No’ and people still weave their way through slow moving vehicles selling peanuts and chewing gum. 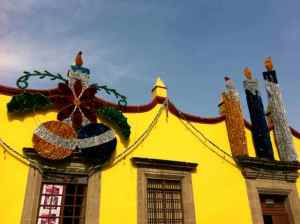 You can get a freshly squeezed juice or a cup full of delicious fruit on street corners for a very small amount of money, chilli is an essential accompaniment to any snack or meal and the colours – of the buildings particularly – are just as vivid as ever.

On the other hand, Starbucks and frozen yoghurt chains have overtaken the city, or at least its more affluent neighbourhoods, and there’s wi-fi wherever you go, which is great news for a roving blogger like me. And, to my amazement and delight, there are bicycles everywhere. I would never have dreamed of riding a bike through this city’s crazy traffic when I lived here but thanks to Ecobici – the Mexico City equivalent of London’s Boris bikes – chilangos are cycling all over the place.

And so it was that I rented an Ecobici on Tuesday and cycled all the way up the majestic Paseo de la Reforma, past the Angel monument, to the Alameda park and to the Palacio de Bellas Artes. I then took a wander around Bellas Artes and marvelled at the murals of Diego Rivera, the Mexican painter who had a tempestuous marriage with Frida Kahlo. 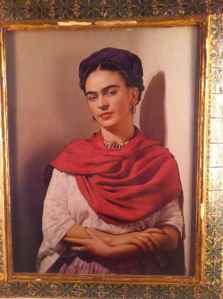 I’d been to Frida Kahlo’s house – the Casa Azul (Blue House) in Coyoacán – a few days earlier – drawn there by my admiration for her creativity and by some sort of affinity I feel for her inner turmoil, expressed so passionately through her paintings.

Frida’s house didn’t disappoint. The colours were as bright and the atmosphere in the courtyard as peaceful as I remember. And I happened to be there in time for a live drama performance of Frida’s life and work.

As I stood admiring her paintings, a thought came to me. If Frida hadn’t believed in her talent as an artist and persevered with her work in the face of illness, a crippling accident and her rollercoaster relationship with Diego, we wouldn’t have her art to look at and the world would be a less colourful place.

Frida said she painted because she felt that she had to, she had a need to. It was her way of expressing herself, her anguish, her pain, her passion. But what if she’d decided to ignore that need, to suppress it, to find something else to do with her time? And what if she’d succumbed to self-pity after she’d had her foot amputated and given up her painting.

The Casa Azul wouldn’t be a museum to her life and there wouldn’t be a line of tourists waiting outside. But instead of giving up, she famously said, “Pies, para qué los quiero si tengo alas pa’ volar” (what do I need feet for if I’ve got wings to fly?)

I had the same thought as I stood in Bellas Artes looking at Diego’s gigantic murals. If he had decided to hide his talent, if he’d thought his work wasn’t good enough to show, those walls would be empty or filled with someone else’s art. The same for David Alfaro Siqueiros or José Clemente Orozco, whose paintings are also displayed in Bellas Artes.

The wall of Frida’s Casa Azul

So what’s your talent? And what’s mine? Is it on display for all to see or are we too shy, too self-conscious or too proud? Are we making the most of our God-given gifts or are we ignoring them or keeping them under wraps? And if it’s the latter, the question has to be why?

While the questions all require some thought, the last two particularly caught my eye. I would like to leave behind my past. Not in the sense of forgetting it but I’d like to throw off the parts of my past that restrict my present and future – the wounds, the thought patterns, the insecurities. And that, in a way, also answers the last question. Because I think that’s the best way I can help others – or at least it’s the first step towards being useful – to become the person who God intended me to be, without the weighty chains of past experiences or self-defeating habits. To blossom into myself, my true self. And from that place, I’m pretty sure that I can help others, that I can be of service.

But I digress from my Mexico City postcard and I’m only halfway through. From Bellas Artes, I wandered through the streets of the historic centre and into the main square, or Zócalo, via a frozen yoghurt shop (pistachio and mango flavour).

The square was packed, not just with people but with an ice rink and an artificial ski slope. Mexico is definitely embracing the spirit of Christmas. Imagine the ice rinks of Somerset House or the Natural History Museum and add the backdrop of the Mexico City cathedral – the oldest and largest in Latin America – the adjacent ruins of a prehispanic temple, and the enormous Mexican flag hanging from a flagpole in the centre of the square. Quite a sight.

On my way home on the metro, something else caught my eye. It was a poster announcing a show that would take place in a theatre the following evening. The show would be a monologue performed by Mexican artist and actress Claudia Cervantes (@Cervantesclau) entitled ‘Soltera Pero No Sola‘ (Single but not lonely/alone – the translation could be either). Given I’d just written a blog with a very similar title – Alone but not lonely – I thought I’d better go along. So I suggested it to a friend – a fellow singleton – and off we went.

We couldn’t have made a better choice. We laughed, and laughed, and nodded to each other, and laughed some more. Claudia has her finger on the pulse of pretty much everything that goes through the head of ‘all the single ladies’, particularly those of us who like to think of ourselves as independent. How we approach relationships, how we often fall for the wrong guy, how our head goes off into the fantasy land of happy families on the basis of very little evidence, how we can spend days in our pyjamas after break-ups and how chocolate can be a substitute – a poor one but a substitute all the same – for other things that are missing in our lives.

How many of us have heard the words, ‘But you’re so pretty and smart and bubbly, how come you’re still single?’ Claudia asked, drawing laughter from the women in the audience.

Judging from the response of the female spectators of Claudia’s show and what my friends here tell me, it seems Mexico is just as full of smart, single, 30- or 40-something, independent women as Britain is. Which reminds me, I really must get on with my book.

In the meantime, a big thank you to Claudia for putting her amazing talents and gifts to excellent use, for making me laugh and for reminding me to appreciate my freedom, independence and singleness – as long as it lasts!

I am a writer, coach, midlife mentor, motivational speaker and the author of How to Fall in Love - A 10-Step Journey to the Heart. I specialise in coaching women and men to have healthy relationships with themselves so that they can form healthy and loving romantic relationships and lead authentic, fulfilling lives. I coach 1:1, lead workshops and host retreats.
View all posts by Katherine Baldwin →
This entry was posted in Creativity, Relationships, Travel, Uncategorized, Women and tagged adventure, Childfree, Childless, Claudia Cervantes, Diego Rivera, Frida Kahlo, Loneliness, Mexico City, singleness. Bookmark the permalink.

1 Response to Postcard from Mexico City