Posted on October 10, 2013 by Katherine Baldwin

There are so many things I love about London but I’m going to have to start with my friends.

For someone of my age, stage and relationship status living in such a huge metropolis, friends become family. They’re whom we call when we find ourselves unexpectedly in hospital, or when we lose our purse, our keys, our boyfriend or our mind. I’d be lost without my London friends – I love my non-London friends too, but this vast and sometimes lonely city means us Londoners form a special bond.

What else do I love? I can draw on so many images. Like scootering or cycling at night across Waterloo or Blackfriars Bridge and taking in the river and the buildings on either side – St Paul’s, the London Eye, the Houses of Parliament, the Tate Modern – all lit up, majestic and imposing. That scene never fails to take my breath away and it always reminds me how privileged I am to live here.

Or biking along the disused railway track from Finsbury Park to Highgate and up the hill to the top of the Heath. Stopping to take in the view from Kenwood House or speeding downhill and taking a sharp right turn towards the duck pond. Sitting on a bench admiring the colours of the trees – they always look picture postcard-perfect and warm my heart, whatever the season. 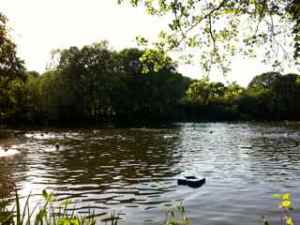 Swimming with the ducks at Kenwood Ladies’ Pond

Or lying in the late evening sun at the Ladies’ Pond, overhearing snippets of conversations from the beautiful, half-naked women all around me – their passions, dreams, worries, frustrations, loves (lost and found), their heartache, depression and joy – or having similar chats with my half-dressed pals (there’s something so freeing and disarming about nude chit-chat, if you know what I mean). Or hearing ladies laugh as they lower themselves gently into the cold water or jump off the platform with a shriek.

Then there are the other open spaces – the deer and ducks in nearby Clissold Park, the roses and fountains of Regent’s and the vast expanse of Hyde Park, which is often host to huge concerts that end with magnificent fireworks displays.

Or those moments inside the Tube or on the Southbank when I stumble across a busker with extraordinary talent, like Susana Silva from Portugal, who lifted my spirits and moved me to tears when I heard her sing by the river one evening.

There’s the eclectic mix of races and cultures into which I so easily fit sometimes – I can practice my Spanish or Portuguese and relive my Latin American years. I can nip down to Tito’s salsa bar at London Bridge, where it’s perfectly acceptable – and fun – to show up on your own. There are colours, flavours and music from all over the world around every corner – eateries, music venues, art classes and dance halls tucked away.

Then there’s the huge recovery community – the myriad of support groups for those of us struggling with addictive, compulsive behaviours. This underground world of church halls and meeting rooms has, in a way, saved my life – it’s shown me I don’t have to live in bondage to food, weight, exercise, compulsive work, people-pleasing, obsessive thinking, or doom and gloom. It’s shown me how to thrive – not just survive – and taught me about spirituality, love, freedom, service and the power of asking for help and helping others. On top of that, there’s my church community, a wonderful mix of people and stories and a space where I can sing out loud, find peace and feel part of a family.

And of course, there’s my little flat. The first home I’ve ever owned and a place of safety, belonging and peace and quiet over the past 11 years, aside from the odd interlude of neighbour noise. I’ve lived here longer than I’ve lived anywhere. It seems I spent decades moving around, never making home, but in London, I stood still. No wonder I feel so attached to my cosy, attic apartment, with its wall of windows, views of treetops and spires and abundance of daylight. Will I ever feel so at home?

But there are things about this metropolis I can’t say I love.

Although the Tube’s fast, I have a deep dislike for travelling underground (aside for the odd encounter with a talented busker). And I don’t like the fact many of my friends live on other sides of the city and that we all have such busy lives. These days, too many of my close friendships are conducted mostly over the phone – usually when one or both of us is walking to public transport, washing up or preparing food. Of course, there are the dinners and drinks and cinema visits but they take planning and they’re all too rare. And sometimes the prospect of bracing crowds or taking long journeys on public transport requires more energy than I’m prepared to muster. Perhaps I’m getting old.

And while London’s parks, greenery and cycle lanes seemed like a Godsend a decade ago after the congestion and concrete of Mexico City and Sao Paulo – millions of people and one major park each – or the dryness of Brasilia, London’s open spaces don’t feel so open anymore.

So my heart, soul, body and mind are yearning for space, for a different panorama. I long to be by the sea and closer to Nature; to get out on my bike after a day’s work and go further than the local park; to swim in open water without having to scooter to Hampstead’s ponds; to spend the weekends in the countryside without first taking buses, Tubes, trains or negotiating traffic; and I long for a different pace of life.

You’ll be pleased to hear I know I take myself with me wherever I go and I’m aware I could be doing what’s known in the therapy world as a ‘geographical’ – thinking a change on the outside will fix the inside.

It’s clear to me that some of my battles with London are of my own making – poor time management, over-working, bad planning, under-earning so I can’t get out as much as I’d like or afford a car, and so forth. That’s stuff I’m going to have to deal with wherever I go. 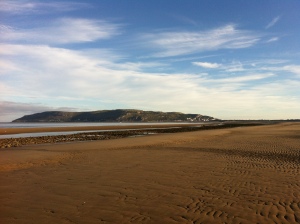 But having just had a few days among the hills and beaches of North Wales and after spending most of the summer in Dorset by the sea, I know there’s a voice inside me that deserves to be listened to and a desire of my heart that I’d like to honour – even if it turns out I was wrong. Because I can always come back – London will still be here.

It’s the sea that’s calling me more than anything else. I grew up in Liverpool, a short walk from the open spaces of Otterspool Promenade – on the banks of the River Mersey, which opens into the sea. It isn’t quite Sydney or St. Tropez, but the coast was never far away and we spent summer days in Blackpool, Southport and Crosby and weeks by the beach in North Wales. I began my days not far from the sea and I can’t imagine going any further from it than I am today.

Leaving London won’t be easy, which is why I’ve only talked about it for the past few years and never made the move. Perhaps more than many, I struggle with indecision and ambivalence, with a push-pull inside me. There’s an urge to go but a desire to stay. There are the pros of moving but I can write a cons list just as long. But when I ask myself which bit is the head – the worry, the fear, the self-doubt – and which bit is the heart – the faith, the trust, the excitement – the answer comes back loud and clear.

There’ll be so much I’ll miss – too much to even write about here – and I know there’ll be times when I’ll feel lost and lonely. But I have those times in London too, more often than I care to admit. The crowds, the buzz, the packed cafés, the queues and the endless list of things to do make me feel I’m at the centre of the action, that I belong to a big club, to the London family. But on many occasions, I’m walking through the crowds on my own or peering into restaurant windows before eating alone at home.

Perhaps that’s what’s changed, at least enough for me to countenance a move to a quieter place. More than ever before – although not as often as I’d like – I’m finding a sense of belonging within myself. I don’t need to be surrounded by people to feel safe and at home.

Looking back, it doesn’t surprise me I spent my most turbulent years – the years of bingeing, starving, binge drinking, compulsive exercising, low self-esteem and self-harm – in some of the biggest and busiest cities of the world. Maybe being at the centre of things reassured me I was OK inside, that I was safe and special. But I also recall leaving the buzz of trendy Sao Paulo – dubbed the New York of South America – for the smaller, quieter and rather odd city of Brasilia and finding contentment running around its parks, windsurfing on its lake and hiking on weekends in a nearby national park.

In one way, I’m surprised it’s taken me so long to find the courage to move given I’ve packed up my life and crossed continents so many times. But I also understand why. While most of the time I’m aware of the amazing opportunities ahead of me and feel full of life and young at heart, I have moments when I think the years are slipping away and I’m running out of time. Playing it safe, not listening to the part of me that longs for change, seems easier sometimes.

But holding on to that idea of a life of opportunity, I have a dream to follow my heart to the sea, to write, to teach, to love, to cycle, to swim, to jump off rocks into the water, to stretch on the sand, to have endless visits from my lovely London friends (please), to have more spare time, a slower pace of life, more space to create and to make my heart and spirit sing – in a small or a big way – every day.

We’re told it’s good to write down our dreams and goals so there you go. But while it feels brave to do so, it’s also terrifying. Because I guess now I have to follow through.

It’ll take time to sort – I’m not sure exactly which bit of the sea I’m going to yet! But I’m going to prepare for change, find out some information, knock on some doors then surrender the outcome, trusting I’ll be led in the right direction.

In the meantime, I’d better post this fast before I change it to, ‘Dear London, I love you … but I think I’m leaving, maybe, perhaps, some day …’ 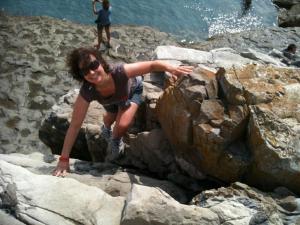 In my element – after a dip in the sea in Dorset

I am a writer, coach, midlife mentor, motivational speaker and the author of How to Fall in Love - A 10-Step Journey to the Heart. I specialise in coaching women and men to have healthy relationships with themselves so that they can form healthy and loving romantic relationships and lead authentic, fulfilling lives. I coach 1:1, lead workshops and host retreats.
View all posts by Katherine Baldwin →
This entry was posted in Addiction, codependency, Faith, Happiness, Health, Recovery, Spirituality, Women and tagged cycling, Dorset, Faith, Fun, Kenwood Ladies Pond, Liverpool, London, open water swimming, salsa, Susana Silva, Tito's. Bookmark the permalink.

7 Responses to Ode to London: I love you, but …