The Magic of March

My 46th birthday. How to Fall in Love published in paperback. A marriage proposal. That’s the magic of March.

When it comes to March, I’m biased.

It’s my birth month and I’ve never shied away from celebrating the day I came into this world, so my memories of March feature birthday picnics and frisbee games in the park in Oxford with my university chums; karaoke nights and dinners out with my girlfriends in London; skiing in glorious sunshine in the French Alps and dancing in ski boots; and one particularly vivid memory of darting into the sea in my birthday suit with my partner on the nudist beach close to my home in Poole. I also see March as a spring month of hope and new beginnings, a time when we get a hint of the sunshine to come and we start imagining long summer days, a month of bright yellow daffodils.

March 2017, however, will go down in my personal history as a truly momentous month.

You may think, because I’ve been writing this blog for five years, because I’ve been a journalist for more than 20 years and because I’ve been writing another book for four years, that publishing a book wouldn’t be such a huge deal. But if you’ve followed this blog for a while, you’ll know a little bit about me. You’ll have read about my fear, my low self-esteem, my deep sense of imposter syndrome and the sometimes crippling perfectionism I’ve had since I was a little girl. You’ll also have read about all the work I’ve been doing on myself to overcome those obstacles – about the personal growth and personal development marathon I’ve been running since I was in my early thirties.

With all that in mind, publishing How to Fall in Love was a huge feat that required tremendous effort, huge amounts of adrenaline and a conscious decision every day to wrestle my inner saboteur to the ground, challenge my perfectionism, walk through my fear and get on with pursuing my dreams.

Next came my 46th birthday, the day after my partner’s 51st birthday, spent under blue skies on a ski holiday in the French Alps. While away, we reminisced about the previous March when we’d finalised the purchase of our first home together over the phone from the slopes, feeling ridiculously middle-class.

My 46th was lovely, but as with all my birthdays in my forties, it brought a hint of sadness and some familiar thoughts. How on earth did I get here, to this age and stage, without acquiring the trappings of ‘normal’ life – marriage and kids? My life wasn’t supposed to look like this. How come it took me so long to find happiness and love? I remembered, though, to be grateful for what I had – a beautiful relationship with a lovely man, writing and coaching work I enjoyed, good health, family and friends, a published book and bags of hope – and to keep my focus on that.

Then, on Friday March 17th, St Patrick’s Day, I sat down to a hot chocolate piled high with whipped cream at a mountain-top restaurant at Col de la Chal, across from my partner and alongside a few of our friends, and admired the spectacular views. 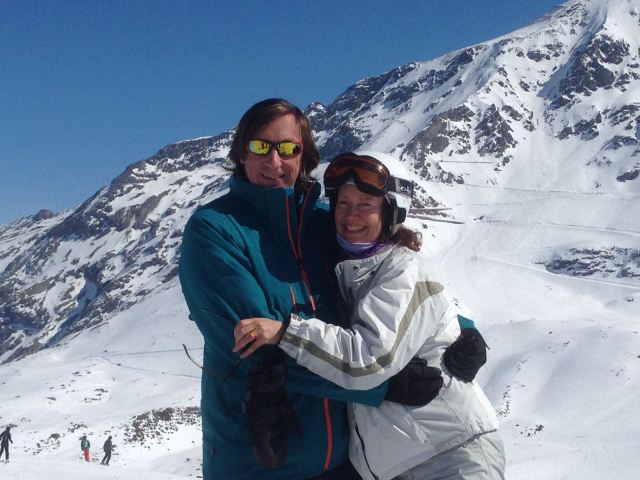 My partner opened up a packet of Haribo sweets for his mid-morning snack and pulled out a red and yellow ring. I imagined he’d gobble it up fast before anyone had a chance to comment on it (he had a habit of avoiding anything marriage-related – he’d always get up fast if he found himself on his knees or shuffle awkwardly at the mention of weddings). But to my surprise (and his, it seems), he placed it on my finger – that finger.

Immediately, I started to cry. I’m not sure exactly why, but I have a feeling I was crying because I understood in that moment that a marriage proposal might happen eventually, even if not there and then, and that was a very moving, emotional prospect, given the journey I’d been on and the journey we’d been on as a couple. Then, as I wiped the tears away, hiding behind my sunglasses and my hot chocolate, my partner slipped onto his knees on the other side of the table, slowly found his words after stumbling over them a little and popped the question. And I said yes.

When I began writing this blog just after my 40th birthday, did I imagine that one day I would blog about a marriage proposal? When I first met my partner, on a cycling trip in Cornwall soon after starting this blog, did I imagine he would be the one I’d agree to spend my life with? When I launched my How to Fall in Love course and began coaching women to have healthy relationships with themselves and others and to fall in love, did I imagine that I’d be sharing my engagement news with them? And when I wrote in the introduction to my book that ‘my partner and I aren’t married yet, but I believe we will be when the time is right’, did I imagine that just nine days after publication, that sentence would require an update? As I wrote in the book, I thought it might happen some day, but I imagined it might take him a few more years to ask. Nor was I sure if I was ready, despite appearing to be on the surface and apparently often dropping hints. It’s easy to load all the commitment issues onto him, but I had my own deep-rooted reservations about tying the knot.

I wonder, too, if I could have imagined how I’d feel in the weeks following the proposal.

As you’ll notice, two weeks have passed since he asked me to marry him and I said yes. For some of that time, we were getting in touch with family and close friends, not wanting them to find out via social media.

But I was also processing a complex array of feelings, as I think he was too. We joked about a 14-day cooling off period like you get when you sign up to a new electricity provider (that ended today!) but while I never considered backing out, I had plenty of emotions to work through before I was ready to announce it to my friends on Facebook (which bizarrely feels like the act that sets it in stone).

In the past two weeks, I have felt elation and excitement – I remember skiing off with the Haribo ring under my ski glove and a big smile on my face – but I’ve also felt fear and trepidation. Marriage is a big deal – my memories of my parents’ marriage and subsequent divorce are unhappy ones and the idea of making such a huge commitment to my partner is a scary one. No wonder I had to get to 46 and do so much work on myself to be able to say Yes. My childhood experiences have left a legacy, as I imagine yours may have done.

I felt worried at first that I wasn’t feeling exclusively joyful – have I made the wrong decision? Should I have a rethink? But then I remembered – I am me. How could I go from being an ambivalent, commitment-phobic, indecisive, complex, not particularly straightforward woman to being the complete opposite in a flash? It wasn’t possible. Mixed feelings were inevitable. And I wouldn’t be real and this blog wouldn’t be worthwhile if I didn’t share them with you.

I’ve also felt some disappointment. I’m not a youthful princess in a fairy-tale being whisked away to a castle on a white steed by my prince, my dress billowing behind me. I’m a real, 46-year-old woman with a complicated history in a real relationship that requires negotiation and compromise and with a man who has his own past and his own wonderful idiosyncrasies.

And then there’s the bitter sweetness, the joy mixed with the sense of loss – the sadness that my life hasn’t followed a ‘normal’ path, that I’m 46 not 36 and that my marriage won’t lead to a family. That’s been a tough one to digest. Accepting his proposal felt like the definitive end of the fantasy of ending up with a couple of kids.

In previous years and particularly when I was single, I believe the desire I felt at times to have children was because I wanted to fill a hole, to medicate my loneliness and sadness, to fix my brokenness. I also wanted to try to heal the wounds of my past by creating the family I always wanted to have as a child – the family unit that stayed together with the perfect mum and dad. I still feel some of that, the child inside me still longs for healing and for a perfect family, but the desire I’ve felt recently (on and off, not all the time) to create a family has been different.

I remember clearly someone saying to me that the problem of falling in love with someone is you want to expand that love, make it bigger, grow it into something more. That’s how I feel now. I love him and sometimes I want to create more of him, more of us.

But I have arrived here late, as so many of us do, and I forgive myself for that and anyone else I might momentarily want to blame. And I have always been ambivalent about motherhood, as I explained in my book and as I’ve written about on this blog.

I will embrace my journey to love, with all its twists and turns, and his journey, and the beautiful way in which our paths have met and converged into one.

I will practise acceptance and gratitude for everything that I have. I have a companion, a life-partner, a fiancé, a husband-to-be. I have laughter, silliness, affection, love and touch every day. And I have a ring to choose and a wedding to plan and plenty of friends and family to enjoy it all with.

Thank you, dear readers, for walking with me on this journey to love. I wish you all the best with yours x

I am a writer, dating and relationships coach, mid-life mentor and motivational speaker. I'm the author of How to Fall in Love - A 10-Step Journey to the Heart and I write for the national media on topics including love and dating, how to change unhelpful habits and have healthy relationships, and other aspects of personal growth. I coach people to create healthy, loving and authentic relationships with themselves and others, and lives they truly love. I lead workshops and run retreats. You can find out more about me at www.katherinebaldwin.com and www.howtofallinlove.co.uk or read my blog at www.fromfortywithlove.com
View all posts by Katherine Baldwin →
This entry was posted in Childless, Happiness, Love, Perfectionism, Recovery, Relationships, Women and tagged acceptance, engagement, Gratitude, How to Fall in Love, marriage, proposal, self-publishing, Writing. Bookmark the permalink.

10 Responses to The Magic of March

filling the silence in the motherhood discussion

United by and beyond childlessness